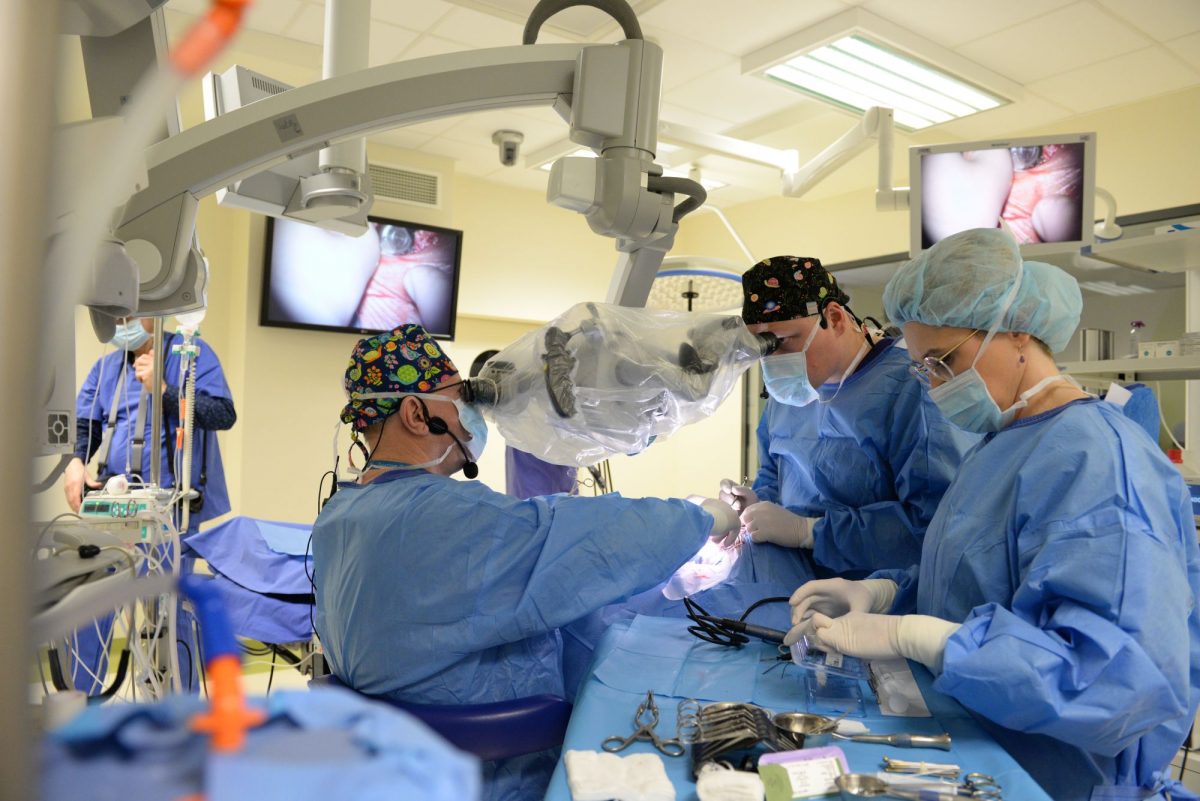 World Hearing Center in Kajetany performed the first  surgery of a pioneering active bone conduction implant in Poland – BONEBRIDGE BCI 602. It was conducted on 27th of February 2020 by Prof. Henryk Skarżyński and his team, including Prof. Piotr H. Skarżyński. The operation has started a new era in the treatment of various hearing impairments occurring within the outer and middle ear. The new implant gives an opportunity to improve hearing in many cases, including in patients after various unsuccessful ear surgeries performed earlier.

The biggest asset and advantage of the BCI 602 BONEBRIDGE implant is its size. Unlike its predecessor BCI 601, the BCI 602 implant is dedicated to a wider group of patients in whom the device could not be implanted due to anatomical reasons (too thin bones, too small a mastoid part of the temporal bone, other congenital deformities).

– The implant that was implanted in Kajetany is a great step forward in the treatment of hearing loss. It provides an excellent quality of hearing, just like the previous model, but thanks to its smaller size it can also be used in children, says Prof. Piotr H. Skarżyński, member of the operating team.

The BONEBRIDGE BCI 602 system uses the phenomenon of bone conduction, which transmits a sound signal through the bones of the skull directly to the cochlea. The device consists of two parts: the external – the speech processor and the internal, completely hidden under the patient’s skin. This system is an effective solution for people with permanent hearing loss after various types of outer and middle ear surgeries, with developmental defects of the outer and / or middle ear, in patients with congenital microtia and / or atresia of the external auditory canal. It is also an option for people with single-sided deafness.

A specific group are the youngest patients, for whom the use of a new implant is an opportunity for proper and normal hearing and speech development. The BCI 602 BONEBRIDGE offers a number of advantages for patients. First of all, it is a possibility to perform MRI at 1.5 Tesla field without reoperation, intact skin – no skin irritation.  Thus, apart from the cosmetic aspect by placing the implant completely under the skin, it has a specific, important medical aspect. It is known thay the use of implants that do not damage the skin results in a negligible rate of postoperative complications and does not block the external auditory canal. The implantation procedure does not require any further surgical intervention, as all parts of the system to be replaced are located in the external sound microprocessor. In addition, placing the quavering transducer completely under the skin allows the patient for a great freedom of use. Due to the fact that the power and electronics are located in the external part, it will be possible to replace them with newer ones even after many years of use. The system can still be improved without any surgical intervention.

The connection of the speech microprocessor and the activation of the system can take place just after a few weeks from the operation. The operating parameters of the device are set by computer based on the results of audiological diagnostics and according to the individual needs of the user. Advanced digital technology used in the processor allows it to be adjusted in such a way as to provide the user with the best speech understanding and obtain the most natural sound in various acoustic situations. Due to its small size and availability in different colours, it is an extremely discreet solution.

Find out more or adjust your settings.

This website uses cookies so that we can provide you with the best user experience possible. Cookie information is stored in your browser and performs functions such as recognising you when you return to our website and helping our team to understand which sections of the website you find most interesting and useful.

Strictly Necessary Cookie should be enabled at all times so that we can save your preferences for cookie settings.

If you disable this cookie, we will not be able to save your preferences. This means that every time you visit this website you will need to enable or disable cookies again.