An integrated system of devices for diagnostics and teleconsultation of diseases of the sensory organs, which can be used by people from the age of 7. The device includes standardized tests to screen the 5 senses: hearing, sight, smell, taste and balance. 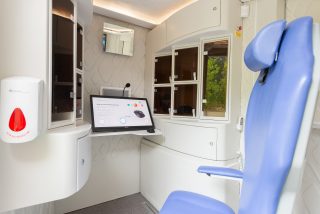 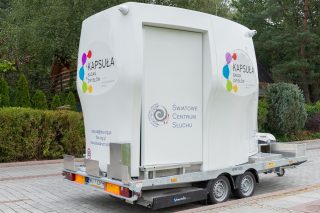 The capsule allows you to perform screening and diagnostic tests in school-age children, adults, occupational groups exposed to various sensory disorders and people of senior age. The device enables quick identification of the problem and directs you to further treatment. In addition, a special portal dedicated to patients and specialists has been developed, to which the results of individual tests are sent. Doctors have the opportunity to quickly contact the patient and indicate any recommendations.

The percentage of patients affected by diseases of the sensory organs is increasing, both among children and in the seniors group. Undetected and untreated disorders in children hinder their development, and after the age of 50 they are one of the main causes of social and professional rejection. There is a chance that these problems can be solved to a large extent with the new device. 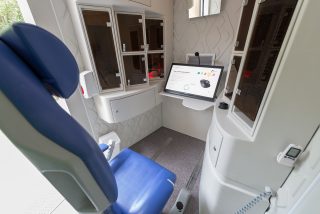 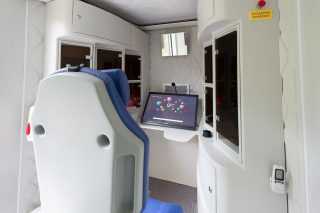 The study of the basic human senses enables the detection of the first symptoms of diseases developing on a neurodegenerative basis. This means, for example, the possibility of predicting the development of Alzheimer’s disease in a dozen or so years, and thus – implementing changes in the patient’s habits and exercises that will delay the onset of the disease even for another dozen or so years. Screening tests reduce the cost of therapy and treatment and improve the quality of life.

The leader of the project, co-financed by the National Center for Research and Development as part of the STRATEGMED project, was the World Hearing Center of the Institute of Physiology and Pathology of Hearing, in cooperation with the teams of the Warsaw University of Technology, the Medical University of Warsaw, Collegium Medicum in Bydgoszcz, the Institute of Sensory Organs as well as the International Center of Hearing and Speech MEDINCUS and Greenfusion Ltd.

The capsule received awards at various international and national fairs and exhibitions, such as the Gold Medal at the Japan Fair, in the inventions category during the 3rd edition of the Japan Design, Idea & InventionExpo-2018 fair, organized by World Invention Intellectual Property Associations (WIIPA), as well as the Chiza and Corporation Best International Design Award – an award for appearance and adaptation to the users.

Currently, there is no such integrated system of devices in the world, thanks to which it is possible to examine the most important sensory organs in one place and in a short time. In order to diagnose disorders of subsequent organs, patients must visit several centers – this means many visits and often long months of waiting for consultations.

For many people, diagnostics are so burdensome that they give up tests and treatment. Importantly, a set of integrated devices contained in such a universal capsule will enable not only diagnostics, but also remote consultation of patients with sensory disorders.

The Sensory Examination Capsule is an innovative multifunctional device that allows for screening and early detection – and thus treatment – of disorders or diseases that, if not recognized in a timely manner, end in disability or complete rejection from normal life. Along with the aging of the society, an increasing percentage of people struggle with disorders of the sensory organs. Early and accurate diagnosis can enable the patient to recover. In the case of Alzheimer’s disease, it is important to start promptly with medications that alleviate the symptoms of the disease and prolong the period in which the patient does not require intensive care.

Before using the Capsule, the User must register on the Portal: https://portalpacjenta.badaniezmyslow.pl/login 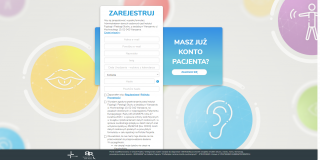 They log in for examinations in the Capsule using the patient’s ID and PIN code or using the QR code, which they receive after registering on the Patient Portal. 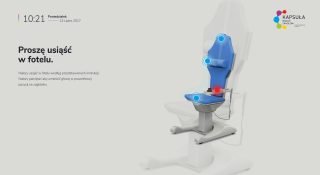 After entering the Capsule, the Patient receives messages that appear on the monitor screen, leading them through the next stages of the examination. The patient is informed how to properly conduct the examination and individual tests. The messages are accompanied by graphics and videos. During the examination, the patient may also receive audio messages – available after pressing the “Listen to the instructions” button, or watch a movie. The messages refer to the possible types of tastes and smells present in the test and the time intervals between each trial. 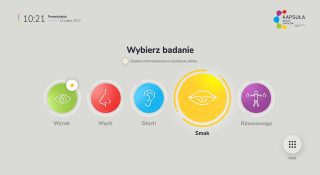 The Sensory Examination Capsule contains the APD audiometer – a device designed to perform screening tests on the hearing organ. The patient is asked to put on headphones. There are sounds or noises in the headphones of varying length, intensity, and volume. As instructed, the patient carries out the commands and presses a button.

The aim of the research is to determine the level of visual acuity to near and far vision, contrast, sensitivity, and color vision. If the patient wears glasses or lenses, they should be worn while the test is performed. The tests are performed separately for the right and left eyes. In some tests it is necessary to put a blindfold on the right or left eye, however some tests are binocular. After all the tests are completed, the result is displayed on the screen. Detailed results of the tests performed are also available on the patient’s profile on the Patient Portal. Based on the test result, further specialist diagnostics may be recommended.

The patient is given a set of samples. Each olfactory sample has a QR code printed on it. The code contains information about the order of the samples. The application requires the patient to scan the QR code, conduct the test and enter the selection of the recognized odor. AVAILABLE FRAGRANCE SAMPLES: cinnamon, banana, smoke, leather, chocolate, gasoline, no odor. The patient is instructed to rub another fragrance leaf and smell the dotted field. They are asked about the type of smell that is perceived and should indicate the smell from the list of answers. After selecting the last answer and hovering the cursor over the “Next” icon, a summary of the entire study will be displayed.

The examination is carried out on a postgraphic mat and with the use of VNG (videonystagmography). The system for recording and assessing imbalances consists of wireless headset Frenzla Framiscoope. The device records the eye movements and transmits it to the eye movement analysis software. The tests are performed independently by the patient in front of a computer monitor. The instructions for the patient appear on the monitor screen. The messages are accompanied by graphics and videos, and voice messages are also available.

The patient does the examination without makeup, and they should not have painted lines around his eyes or have fake eyelashes. The goggles should be put on carefully and configured according to the on-screen instructions. 5 tests are performed:

The examination consists of recording the patient’s eyeballs in various movement scenarios. The recording is made using goggles with a camera and an eye plug. The film is transferred wirelessly to the capsule computer by means of video image processing devices. At the end, the system displays a summary of the study together with the information that the detailed result will have on the patient’s profile on the Patient Portal.

WHAT HAPPENS AFTER THE EXAMINATION IS CONCLUDED? 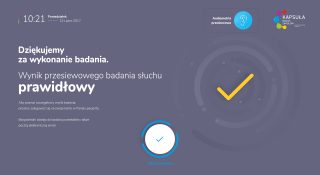 The test result is sent to the patient’s profile on the Patient Portal. In the tests of Hearing, Central Auditory Processing Disorder (CAPD), Smell, Taste and Vision, the tests are evaluated by an algorithm and the result is immediately visible on the screen, as either ‘normal’ or not. In the case of posturography and VNG (examination of the labyrinth, which is one of the most modern methods of diagnosing vertigo), a specialist assessment is needed, which is done through the Doctor’s Portal. After consulting a specialist, the results go to the Patient’s Profile.

The tests are serviced independently, but the process is supervised by the Capsule supervisor. The caregiver of the Sensory Examination Capsule is a person who professionally supports patients in carrying out examinations in the Capsule, ensures their safety and is responsible for the proper functioning of the device. This person must be of legal age, have at least secondary education and have basic computer skills. It is desirable that the Capsule’s guardian has completed a school enabling the performance of medical professions, e.g. associate medical staff, medical technician, hearing care professional, audiologist or a student of medical faculty.

To obtain the professional qualifications of the Sensory Capsule Tutor, you must pass the exam after completing the course conducted by the World Hearing Center of the Institute of Physiology and Pathology of Hearing (Mokra 17, Kajetany near Warsaw, 05-830 Nadarzyn, www.whc.ifps.org.pl) .

The person who is the Guardian of the Sensory Examination Capsule is characterized by certain professional predispositions, the most important of which are:

How long does the examination take?

The screening of the 5 senses takes about 2 hours in total.

Can the examination be stopped

Yes, the examination can be interrupted, and can be returned to after some time.

Is the examination paid?

The examination is carried out as part of promotional campaigns or other pro-health programs, eg “Health First” and is then free of charge.

How many people have been tested in the Capsule so far?

In which countries is the capsule used?

Currently only in Poland.

How many examinations are performed per hour?

From 3 to 4 individual examinations.

Are there any contraindications to using the Capsule?

There are a few contraindications, in particular:

Is the examination harmful?

With the above contraindications, the examination is completely harmless.

Find out more or adjust your settings.

This website uses cookies so that we can provide you with the best user experience possible. Cookie information is stored in your browser and performs functions such as recognising you when you return to our website and helping our team to understand which sections of the website you find most interesting and useful.

Strictly Necessary Cookie should be enabled at all times so that we can save your preferences for cookie settings.

If you disable this cookie, we will not be able to save your preferences. This means that every time you visit this website you will need to enable or disable cookies again.